Amid these challenging circumstances, SCWA thanks you for your continued support!  Preview our new SCWA YouTube Channel featuring SCWA Board Directors Dr. Jacek Lubecki, Dr. Mohamed Mukhtar, and Dr. Olavi Arnes; as well as the Virtual Webinar Series. Throughout the SCWA summer hiatus, we invite Members to stay engaged & participate in various FREE & FEE Virtual Webinars offered by World Affairs Councils from around the United States of America. Both FREE & FEE Virtual Opportunities are listed below and updated weekly just follow the links. ~ Stay Tuned & Stay Healthy, SCWA!

SCWA Webinars are AVAILABLE until September 1, 2020

“In the Shadow of the Bear: Defense Policies of East-Central European Countries and the Russian Challenge” presented by SCWA Board Member Dr. Jacek Lubecki

What is the future direction for Eastern & Central Europe?  Dr. Lubecki discusses three scenarios based on the history of Eastern & Central Europe countries between two world wars and the Cold War, the region’s turn to liberalism and NATO in 1989 – 1999, NATO’s expansion and the War on Terror from 1999 to 2014, a resurgent Russia, and President Trump and Nationalistic Populism.

“The Many Faces of Islam” An abstract presented by SCWA Board Member Dr. Mohamed Mukhtar

Since the end of the Cold War and the demise of the Soviet Union, the United States and the West have configured a new threat to Western Civilization.  Instead of the Commies are coming, it is “the Muslims are coming.”  Islam is a violent religion that became a cliché used by most Western analysts, media outlets, corporations, and governmental policymakers; Muslim mosques in the USA are perceived as terrorist enterprises.  Yet few non-Muslim Americans could give an accurate explanation of what Islam is.  Dr. Mukhtar’s talk on the “Many Faces of Islam” is an attempt to clarify the clouded thinking of Americans about Islam, its culture, and its adherents.

There is an old adage “Russia is not as weak as it looks; Russia is not as strong as it seems.”  Dr. Arens examines the relations, or the lack of relations, between Russia and the West (the US and Europe) since the end of the Cold War; including the current estrangement.  He also addresses the perspectives for the future of the relationships.

~Engage in the 2020 GREAT DECISIONS StreamN’

Members, Sponsors, and Partners are the lifeblood of the Savannah Council on World Affairs

Critz Auto Group has been striving to provide the highest standard of automotive excellence in the Savannah and the Coastal Empire for over 80 years. We are your exclusive local dealer for Buick, GMC, BMW, Mercedes-Benz, and Sprinter Vans, specializing in new, used and certified pre-owned vehicles.

We are grateful to our members for their continuing strong support and are counting on it in the future! If not already, please consider becoming an SCWA member to support our programs and scholarship grants.  Stay well and informed until we personally see each other again soon.

SCWA modest membership fees to cover speaker expenses, our Student Scholarship Program, and operational expenses on an all-volunteer basis. Help support these efforts through an SCWA Annual Membership for yourself, family, or friends. 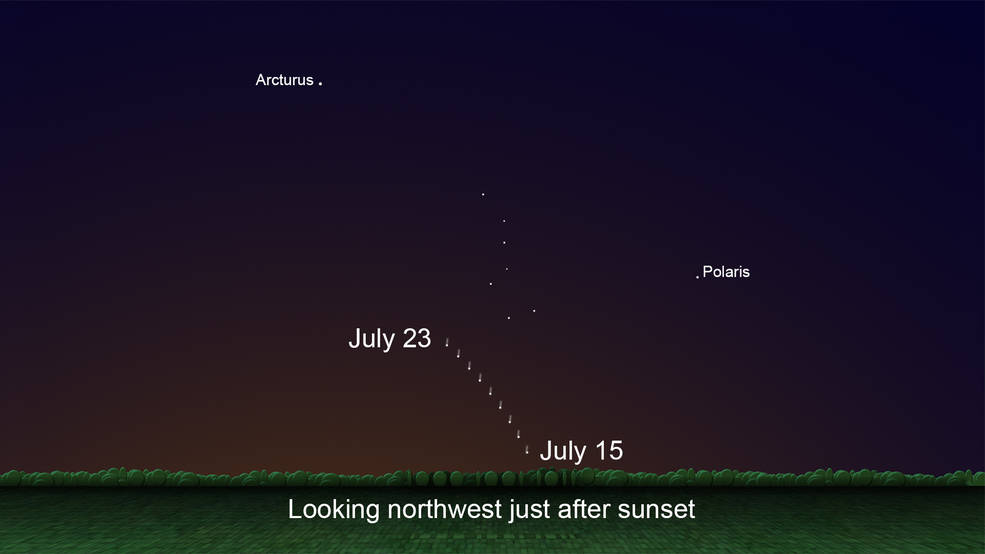 How to See Comet NEOWISE by NASA
Observers in the Northern Hemisphere are hoping to catch a glimpse of Comet NEOWISE as it zips through the inner solar system before it speeds away into the depths of space. Discovered on March 27, 2020 by NASA’s Near-Earth Object Wide-field Infrared Survey Explorer (NEOWISE) mission, Comet NEOWISE is putting on a dazzling display for skywatchers before it disappears, not to be seen again for another 6,800 years.

For those hoping to catch a glimpse of Comet NEOWISE before it’s gone, there are several observing opportunities over the coming days when it will become increasingly visible shortly after sunset in the northwest sky. If you’re looking at the sky without the help of observation tools, Comet NEOWISE will likely look like a fuzzy star with a bit of a tail, so using binoculars or a small telescope is recommended to get the best views of this object.

For those hoping to see Comet Neowise for themselves, here’s what to do:

Just after sunset, look below the Big Dipper in the northwest sky

If you have them, bring binoculars or a small telescope to get the best views of this dazzling display

Each night, the comet will continue rising increasingly higher above the northwestern horizon as illustrated in the below graphic:

It goes without saying that the coronavirus infection is an incredibly fluid and dynamic situation.  For COVID-19 Updates and Trackers VISIT

SCWA provides annual student stipends to support engagement in educational study abroad programs.  SCWA believes that such programs increase an individual’s perspective on world affairs and give them a better foundation for future global community involvement.

Candidates from GSU and SSU undergraduates are eligible! For more information click Here.

On behalf of Savannah area students, Thank You!

The Savannah Council on World Affairs and The Learning Center of SCI are pleased to co-sponsor Foreign Policy Association’s Great Decisions in the Spring 2020 under the leadership of SCWA Board Member, Mohamed H. Mukhtar, Ph.D.

StreamN’ through YouTube, Netflix, Amazon, etc. has revolutionized documentary viewing and brings some of the world’s most critical issues to heart through high-quality, nonfiction content.  Amongst SCWA Members’ recommendations, we’ve picked out some of our favorites.

“They Shall Not Grow Old”

WWI Soldiers eating, joking, smoking…saying their last goodbyes.  Through ground breaking computer restoration technology, filmmaker Peter Jackson’s team creates a moving real-to-life depiction of the WWI, as never seen before in restored, vivid colorizing & retiming of the film frames, in order to honor those who fought and more accurately depict this historical moment in world history. Written by Curtis Medina

The 2014 Ukrainian-Crimean crisis has raised serious questions in the West about Russian motivations and future policy directions. Now more than ever, it is imperative to explore the defensive perceptions, reactions, and preparations of neighbouring countries, the Czech Republic, Hungary, Poland, and Slovakia. Is there a convergence of their approaches along similar paths, or do their different cultures and historical experiences prefigure a divergence of their defense policies? While Slovakia, Hungary and Czech Republic all seem to have little concern about Russia’s policies in Ukraine, the Polish response has been uniquely strong and militarized. Dr. Lubecki’s book explores reasons for the different responses to the crisis.

Purchase through this Amazon Smiles link and a portion of your purchase will be donated to SCWA. Thank you!

Thursday, September 10, 2020 –
Dr. Alasdair R. Young “Breaking up is hard to do: Brexit and European integration”.

Michael Lind
The Return of Geo-Economics

Dr. Tom Bollyky Plagues and the Paradox of Progress: Why the World Is Getting Healthier in Worrisome Ways

Dr. Evan Ellis Dynamics of the crisis, prospects for transition, and implications for the region